Changes to our education system have been a topic of local and national debate for over thirty years. The catalyst came in 1983 when The National Commission on Excellence in Education published a report titled, “A Nation at Risk: The Imperative for Educational Reform.” The chairman of the commission wrote, “Our purpose has been to help define the problems afflicting American education and to provide solutions, not search for scapegoats.” Education reform efforts across the country are committed to this same philosophy today. 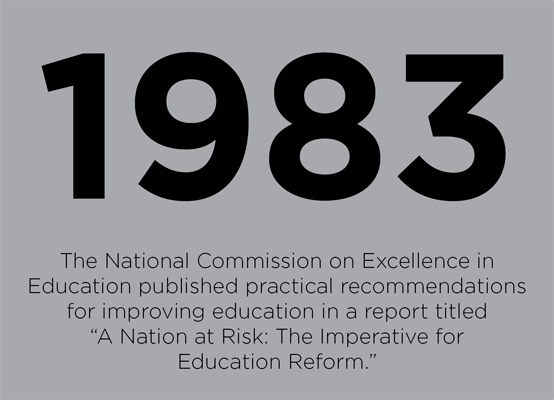 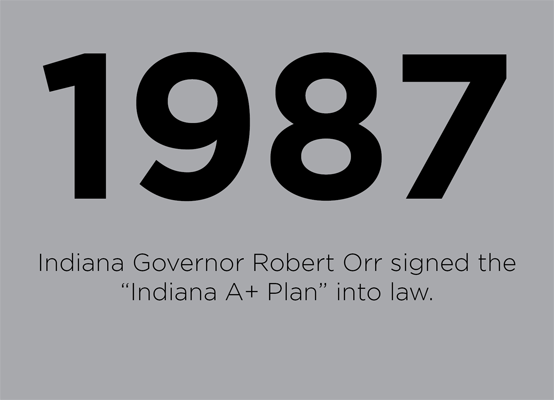 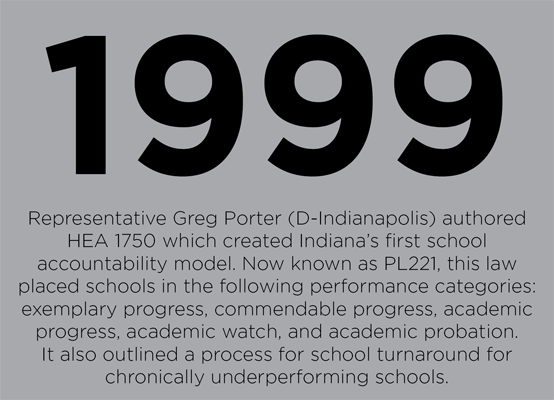 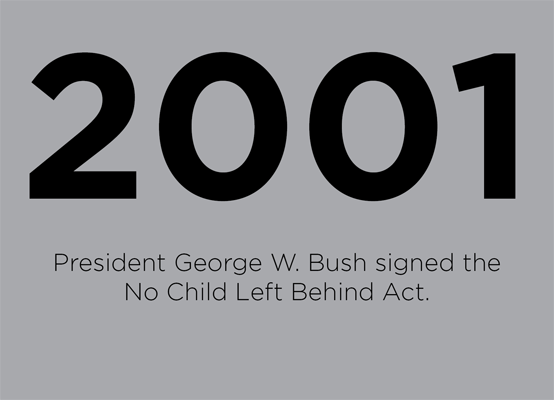 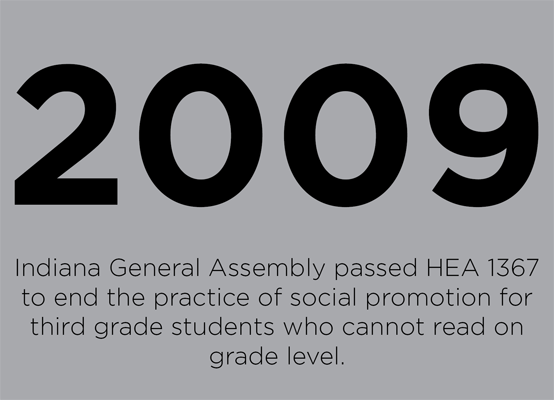 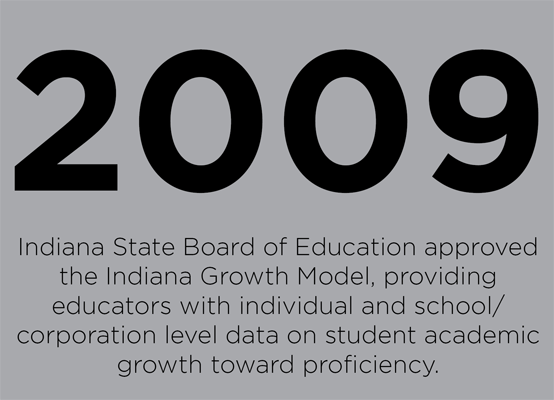 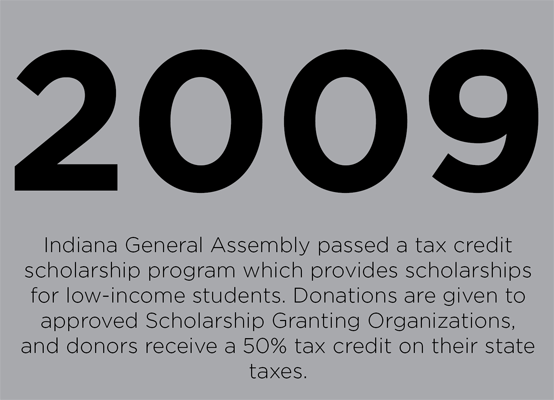 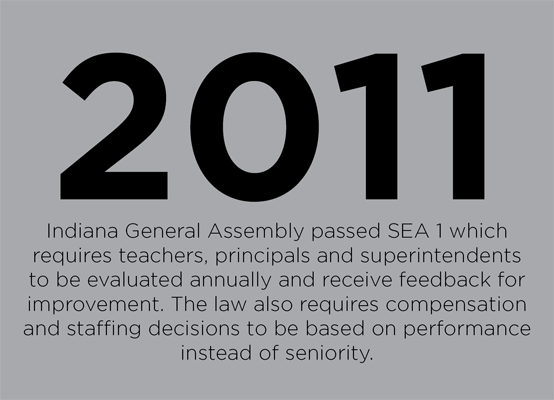 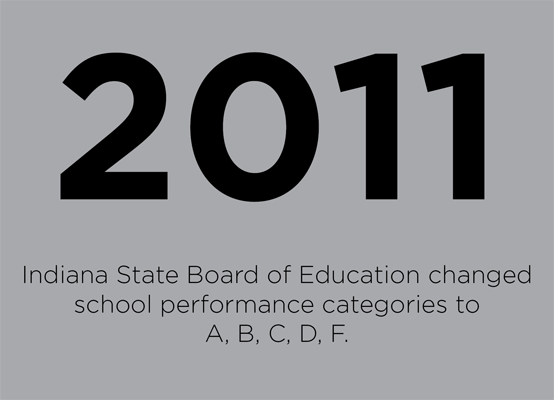 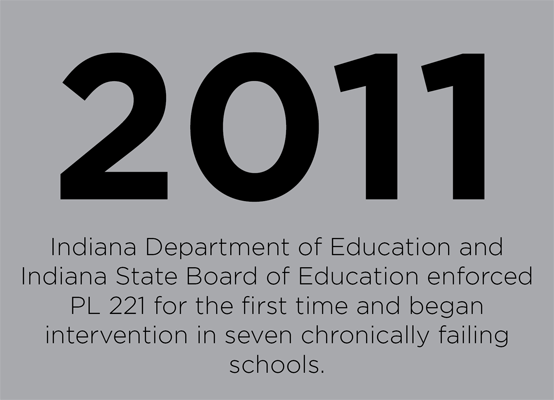 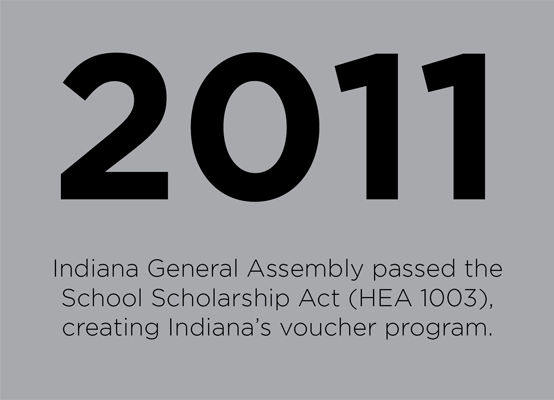 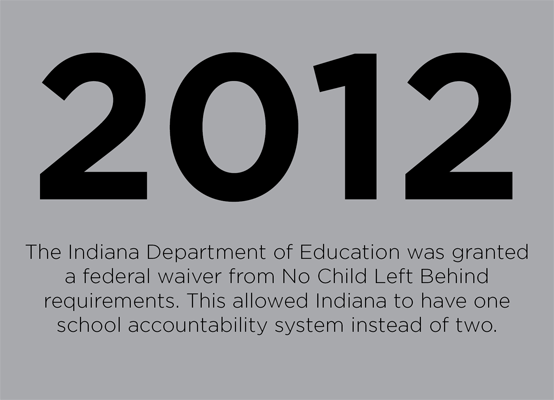 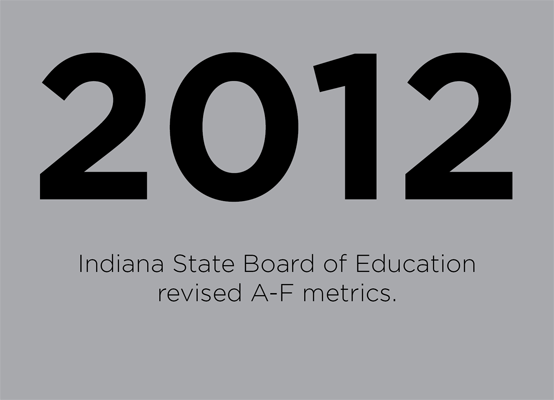 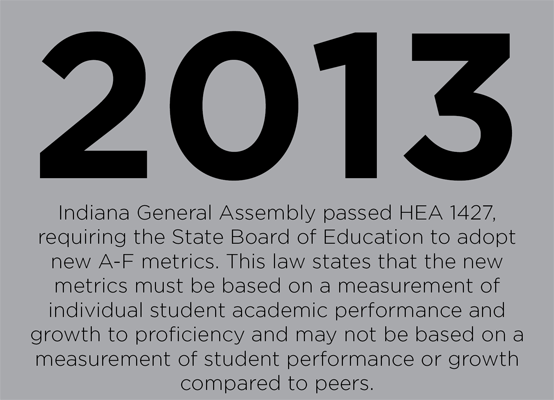 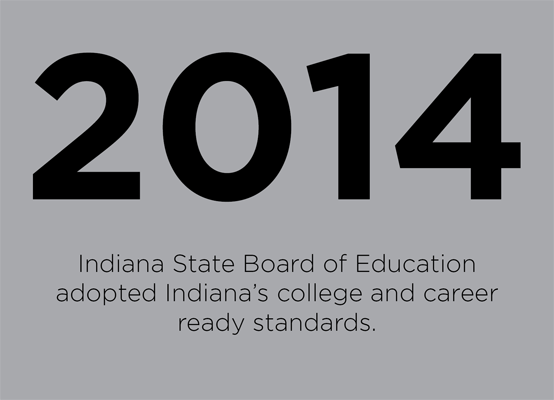 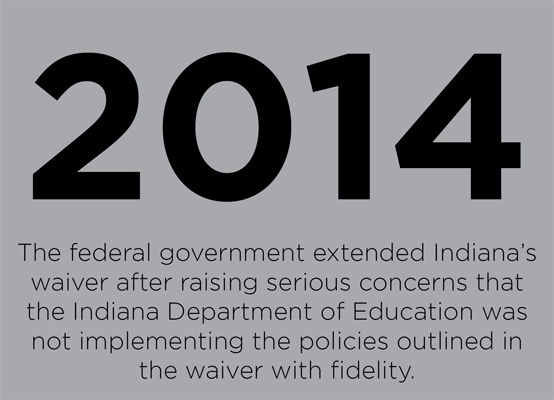 Student achievement is on the rise in Indiana. Since Governor Daniels brought education policy to the forefront in our state, educators and students have responded to increased expectations. 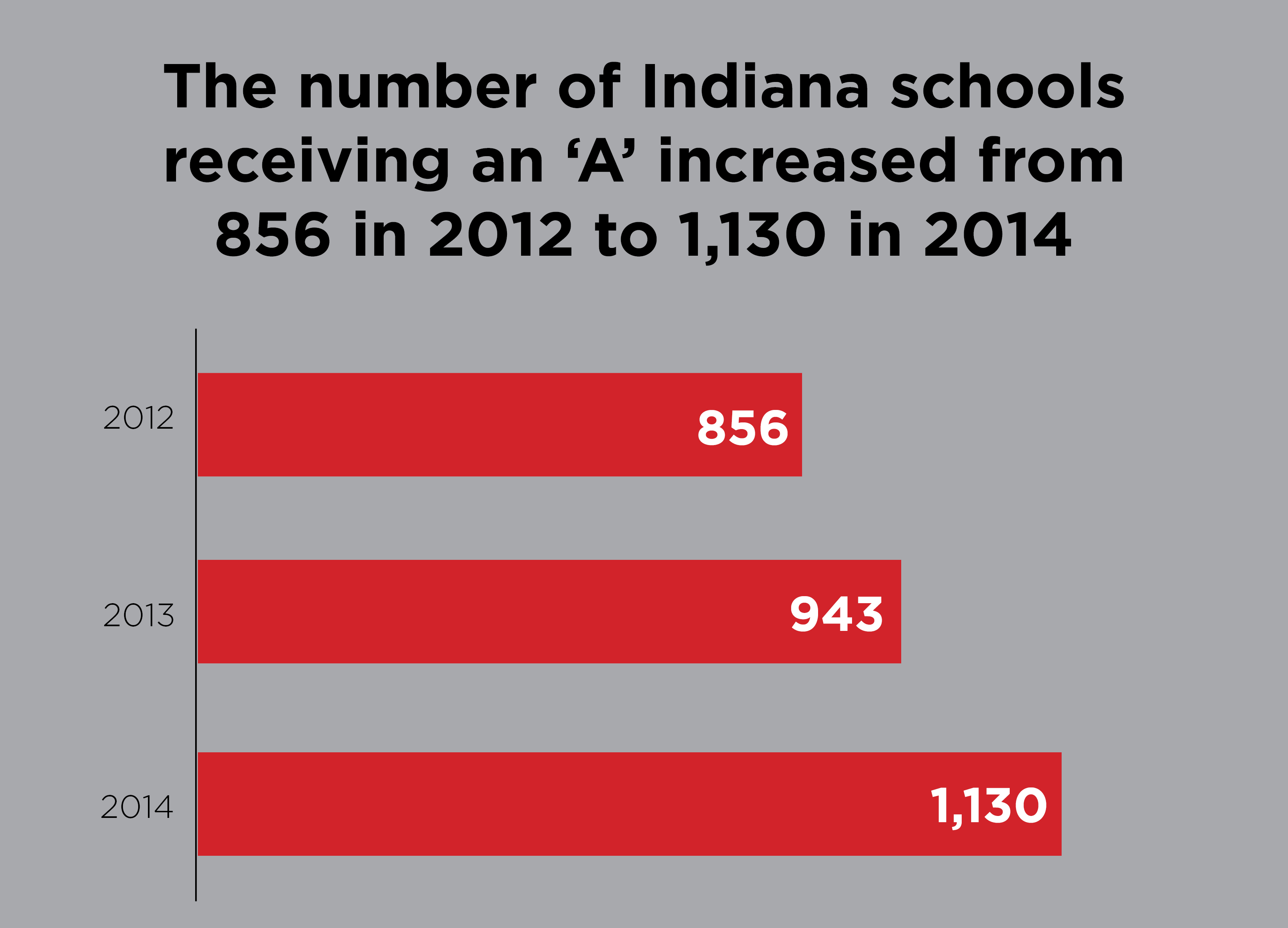 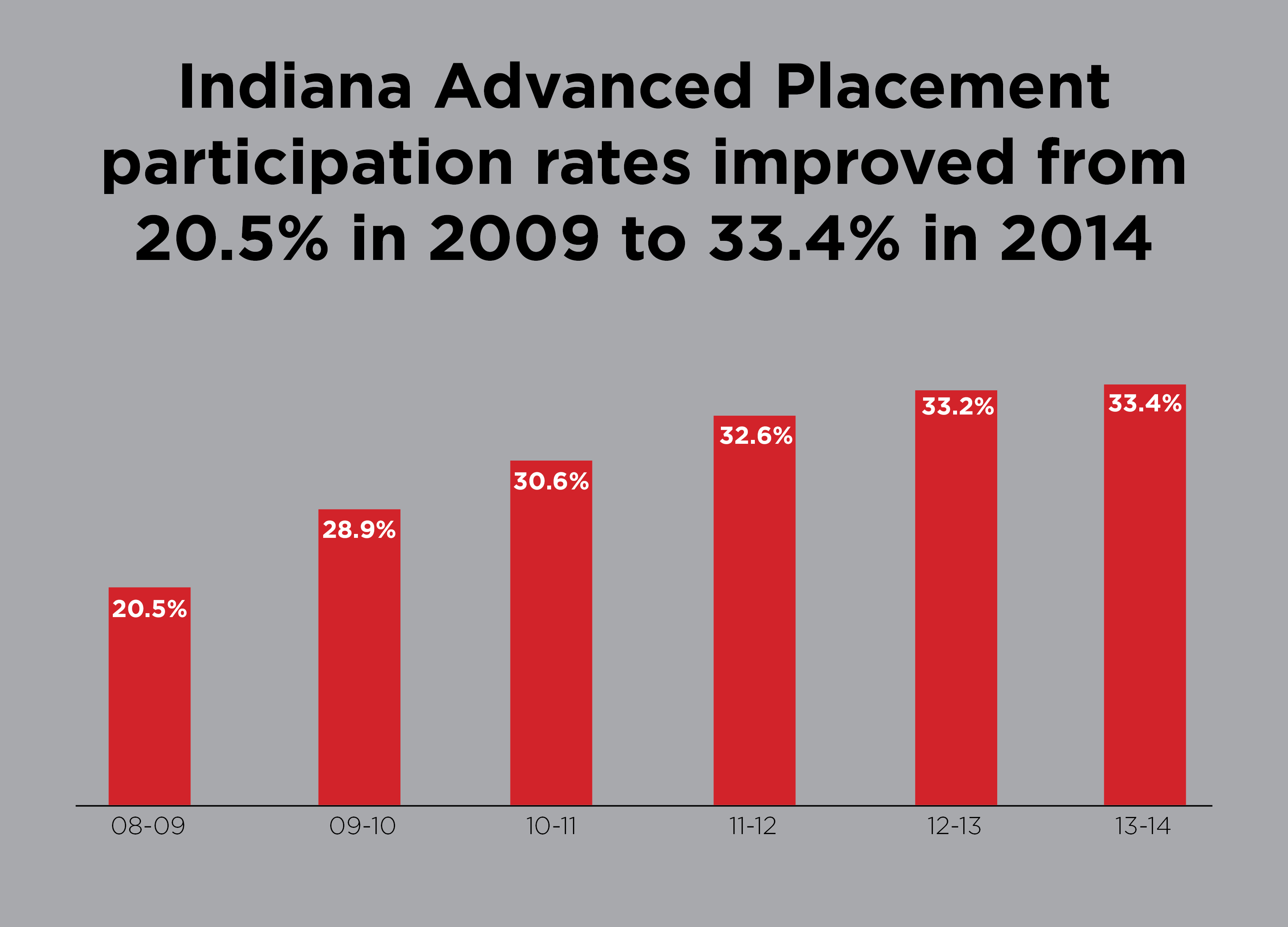 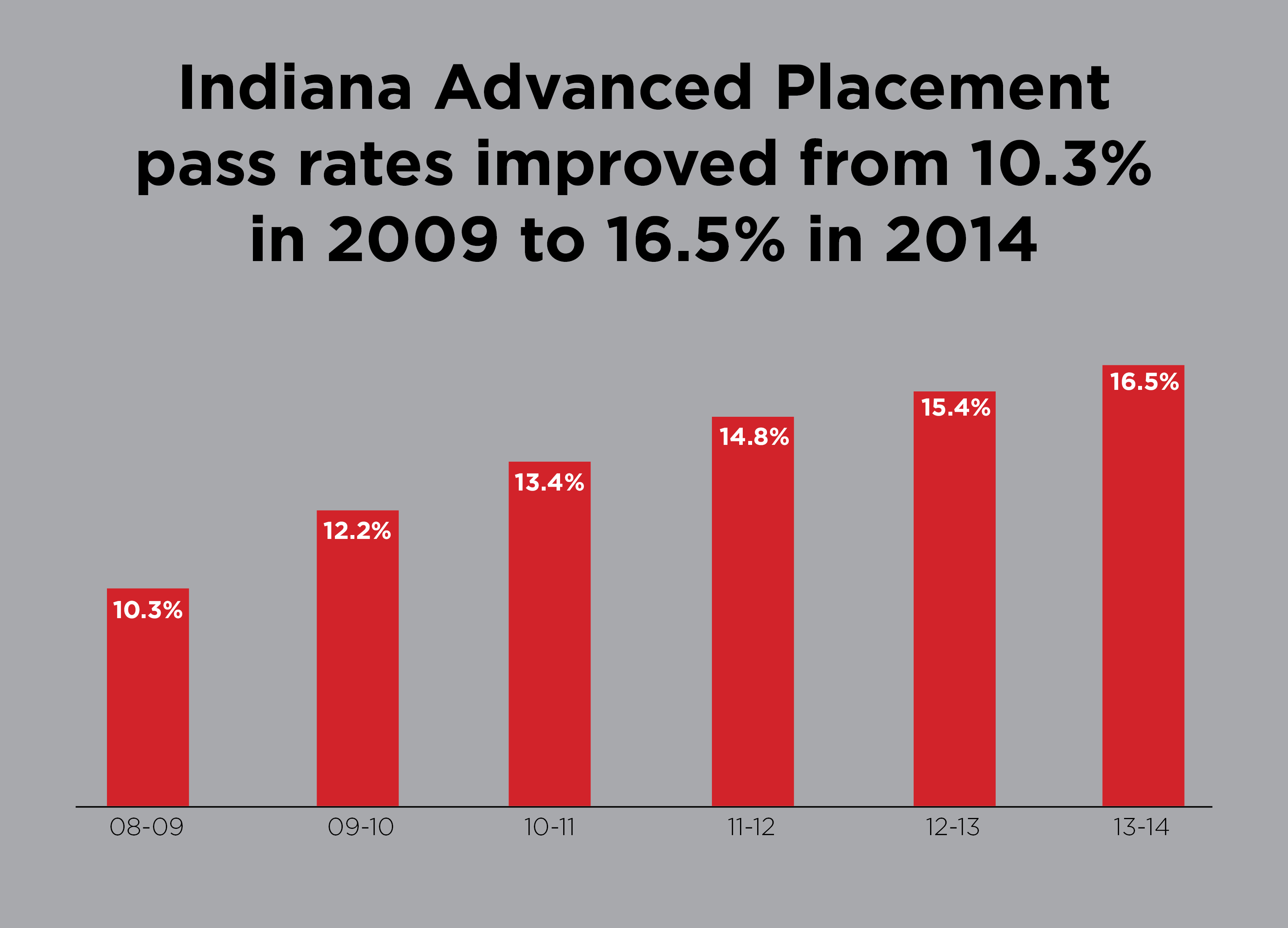 A Vision for the Future

The progress we’ve seen in education is encouraging. Our state must continue to build on the success of recent years and look to the future. We are leading the country in education policies that give schools a roadmap for success. It is imperative to continue the implementation of these policies while looking for new ways to innovate and ensure more students exit our K-12 education system with a foundation for success and the tools necessary to provide for families of their own one day. When it comes to our children, their education can never be “good enough.”

Indiana’s first charter school law was enacted in 2001. In 2011, Indiana passed the most expansive school voucher program in the nation (HEA 1003). The Indiana Choice Scholarship program allows low-income families the ability to choose the best educational options for their child(ren) regardless of their zip code. In 2013, the program was expanded to allow additional pathways for students to receive a voucher and in 2016 legislators added a second enrollment window that will allow students to receive a voucher mid-year starting in the 2017- 2018 school year.

Currently, the Choice Scholarship (voucher) program serves more than 34,000 students making it the largest school voucher program in the country.

Regardless of where a student lives or what type of school they choose to attend, quality course options are important. Indiana must level the playing field when it comes to ensuring all students may access excellent curriculum through options such as Advanced Placement courses, International Baccalaureate programs, Career and Technical Education courses, and highly effective Science, Technology, Engineering and Math (STEM) teachers.

Prior to the federal adoption of No Child Left Behind, Indiana measured progress of Indiana schools (including public and accredited non-public schools). In 2011, the State Board of Education (SBOE) decided to switch from unclear school accountability placement categories (Exemplary Progress, Commendable Progress, Academic Progress, Academic Watch, and Academic Probation) to easy-to-understand letter grades (A, B, C, D, and F).

Even with these easy-to-understand letter grades, traditional public schools could fall into the D or F category for six consecutive years before any intervention was required by law.

In 2015, the Indiana General Assembly passed a law changing the accountability timeline from six years to four years for traditional public schools. With the passage of this new law, traditional public schools are held to the same timeline as public charter schools for the first time. Private schools accepting vouchers still have the shortest accountability timeline of two years. After two years of receiving a D and/or F rating, a voucher school may no longer accept new voucher students.

During this same year, Indiana switched to more rigorous academic standards and assessments for students. This new bar for accountability was developed by a panel of educators, parents, and elected officials with feedback from Hoosiers across the state. Student test scores have seen an expected dip during this transition period. With honest feedback on how students are performing, it will take time to meet the new, higher benchmark.

The passage of SEA 1 in 2011 ended seniority-based layoffs and required each educator (including principals and superintendents) to be evaluated annually. Teachers should now be receiving feedback on how to improve and grow as a professional.

Attracting and retaining great teachers should continue to be a top priority. Once in the classroom, teachers must receive quality support for professional growth and school leaders need flexibility to pay teachers accordingly. Additionally, teachers deserve multiple career pathways which will allow them opportunities to advance professionally without leaving the classroom.

Schools must adopt evaluation models that include student growth data, but the law allows schools the flexibility to create their own evaluation plan, adopt nationally recognized models such as PAR and TAP, adopt the state’s model (RISE), or modify RISE. Local districts may decide things such as how much weight will be given to individual student growth scores, whether or not to include the school’s letter grade as a component of evaluations, and who performs the evaluations. When ISTEP growth scores are available, they must be used, but schools can also choose other measurements of student growth to supplement these scores. For educators who teach subjects not tested on ISTEP, the local district determines which assessments and or projects will be used to measure student growth. In 2016, HEA 1003 prohibited ISTEP scores from being factored into a teacher’s evaluation if the score would negatively impact their ranking.

In 2015, the Indiana State Board of Education contracted with Indiana University to review teacher evaluation plans used by local districts in 2014- 2015 and 2015- 2016 school years. The study looked specifically at objective measures used in teacher evaluation plans and other characteristics of plans statewide. Among other findings, the report showed nearly 1 in 5 districts were not using Indiana Growth Model data in teacher evaluations. The full study may be found here and the presentation given to the State Board of Education may be found here.

Indiana taxpayers spend 53% of the entire state budget, or roughly $8,000,000,000, on K-12 education. During the 2015 legislative session, lawmakers increased K-12 funding by over $470 million - the largest funding increase in our state’s history.

Children are best served when tax dollars fund students- not school buildings. To ensure Indiana is maximizing our investment in educating children, money set aside to educate those students should follow them wherever they are educated.

More than ever before, low and middle income families may access education options that have historically only existed for the elite. Therefore, it is vital that programs like the Tax Credit Scholarship are preserved and expanded. Last year through the generosity of Hoosiers, nearly 9,500 children were granted scholarships that allowed them to be educated at a school of their choice. Since it started in 2009, the demand for the program has grown. In fact, the 9.5M cap for fiscal year 2016 was reached on December 19th, exhausting all available tax credits.

Indiana invested nearly $6.8B in K-12 funding during the 2015- 2016 school year and is expected to invest nearly $7B for the 2016- 2017 school year. This represents a nearly $1B increase over the last ten years and is the largest K-12 funding investment in Indiana’s history. When all K-12 education-related programs are considered, total spending is approximately $8B, or more than half of the entire state budget. While funding has increased over the last ten years, enrollment has remained relatively flat at 1,014,048 students in fiscal year 2007 and 1,055,147 students in fiscal year 2016.

It is important to note that public charter schools do not receive property tax dollars like their traditional public school counterparts. In 2015, that equated to a total of $2.7B additional funding, or about $2,758 per student.

Our team works hard to respond quickly to your inquiries. Please expect a response within two business days.